Today I am going to be doing a comparison of V05's Dry Backcombing Spray and L'Oreal's #TXT Volume Supersizing Spray. 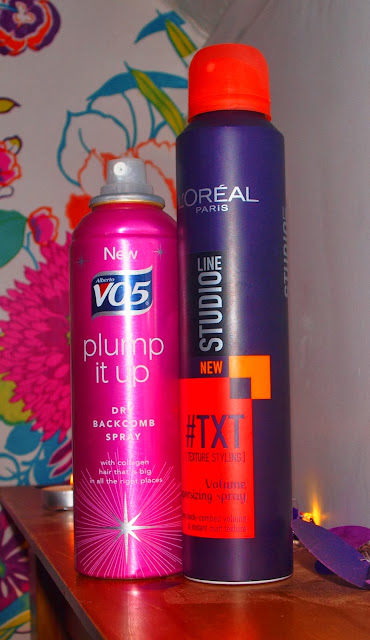 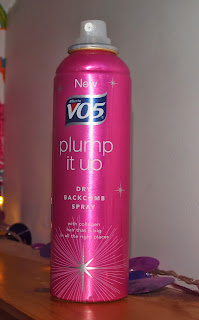 V05 Plump it Up Dry Backcomb Spray - £3.79 here
I'm not sure how this spray works, but it is amazing. It really makes your hair look as though you've backcombed it without the damage or the time! I don't generally backcomb my hair on top as I think it looks a little bit like I've just got out of bed so I will generally pick up the top layer and backcomb underneath to give volume on top, so this is what I do with this spray. It lasts well and it does exactly what it says on the tin. It also smells quite nice, sort of fruity. 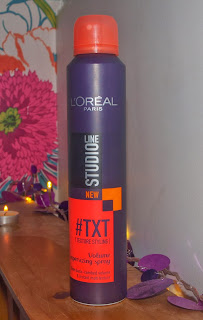 L'Oreal Studio Line #TXT Texturizing Spray - £3.79
This spray is also really good, and instantly adds texture to my hair, however rather than making it look backcombed this one just adds texture. I can use this spray anywhere on my hair and, unlike with the V05 one, I don't need to separate my hair first. This one also smells nice, however its more like the smell of a salt spray.
Now for the comparison:
Both of the sprays are the same price for the same amount (200ml) and I like the way both of them work, in different ways.
Although the L'Oreal spray highlights its 'Matt Finish' I think both sprays achieve this. The V05 spray comes out of the can as more of an aerosol, like a body spray or deodorant would whereas the L'Oreal spray is more like a wetter spray, but it doesn't leave any wetness on your hair.
I like both of these texturing sprays and they both work really well, however overall for daily use I think I prefer the L'Oreal #TXT spray, even though the V05 spray gives more volume as its easier to use and I don't want my hair to have too much volume haha.
Have you tried either of these? Which one is your favourite?
Bye!
Posted by Unknown at 18:03

I am interested in everything fashion and beauty, and i'm quite open to try anything :)